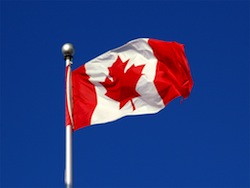 It’s not uncommon for a bilingual form of the national anthem to be sung at official functions and for many people to mumble along during the French section before happily joining in again for the English finale. During the “mumble zone” I imagine most people try to roughly equate the French sounds with the replaced English words without realizing that the French lyrics are different than those in English! Those silly French… or English?

It may surprise you to know that the Lieutenant Governor of Québec in 1880, Théodore Robitaille, originally commissioned our national anthem for a St. Jean-Baptiste celebration. The poet and judge, Sir Adolphe-Basile Routhier, wrote lyrics to the music by the musician and composer, Calixa Lavallée. The song was originally sung on June 24, 1880, and the lyrics were entirely in French. In fact, an English translation didn’t appear until 1906, and it wasn’t until 1908 that Robert Stanely Weir (another poet and judge) wrote new English lyrics. After two changes (including input from a government committee in 1968) and many decades, “O Canada” officially became our national anthem on July 1, 1980 as part of the Canada Day celebrations.

So the next time you’re faced with the bilingual national anthem, belt it out! When asked about your confident singing, share the interesting history of our national anthem.

For more history and for English, French, and Bilingual mp3s of the anthem, head to the government’s Canadian Heritage website.

For interest’s sake, I have also included the full lyrics on the next page:

How to Learn Sections